What is a computer bug?

“It was a real pleasure to

An On Field Measurement Example:

RSCP and RSSI in UMTS

RSCP In the UMTS cellular

In computing, a computer bug is an error in the operation of the software. It results from an un-calculated anomaly and is capable of generating unexpected behavior. This is a mistake made when writing a program. A mistake that then ends up alternating the correct functioning of a software or a hardware component. A bug can not only limit the operation of a device.

There are several types of bugs, some of which can be solved simply with an update. That’s why it is necessary, as many cybersecurity experts advise, to download the latest updates. Hackers are adept at finding a bug and using it to target victims’ devices.

The origin of the term

The word bug, in English, means “insect” and is a term that began to be used in computer science because of an insect. On September 9, 1947, Grace Hopper and her team were trying to figure out why the Mark II (an electromechanical computer) was not working. By dismantling the computer, Hopper realized that the cause of the malfunction was a moth that had gotten stuck between the circuits.

After removing the insect, the smooth functioning of the computer was restored, Hopper pasted the moth removed on the computer register and noted: «1545. Relay #70 Panel F (moth) in relay. First actual case of bug being found», that is “First real case of finding a bug“. And so the phrase began to be used to indicate a computer error. Hopper, however, was not the first to use the term to indicate a technical failure. 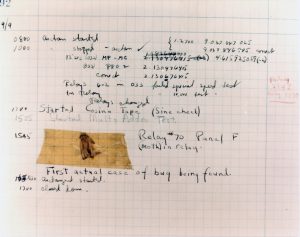 Although there are rare bugs in the hardware, that is problems in the design of a “physical” element of the computer, these errors are usually found in the software and are of various types:

The presence of bugs can be frequent and, although they often cause minor problems, in some cases they can also have serious consequences. It is therefore important that experts in the creation of websites are able to recognize and correct them.

To prevent such errors during the programming phase, it would be advisable to use code writing software that can automatically correct, suggest and compile code syntax. In addition, most languages have tools that can read written code by helping the developer check that the syntax of what is written is correct.

From the bug comes another term, always used in the computer field: debugging. This is a control process through which developers, after writing a program, verify that there are no errors in the source code. The term debugging can mean many different things, but more literally it means removing bugs from the code.
There are many ways to do this. For example, you can debug by scanning code for typos or using a code analyzer. Or you can debug the code using a performance profiler or using a debugger. A debugger is a computer program that allows you to detect and diagnose errors in the software by performing a full survey of the source code of a computer program.

If you liked the article share it on your social media and follow us to not miss any more updates!

The digital transformation of network

“It was a real pleasure to

arimas® strengthens its presence in Bulgaria!

Let's talk about your project!