Radio Mobile Services operates on multiple frequency bands, each one with different characteristics, such as, for example, propagation effects and the theoretical maximum speed. Furthermore, the operators’ spectral assignment is not always the same.

A summary of the frequencies available for each operator has been provided in the following table. Some additional details have been added to highlight the characteristics of each Frequency Band. 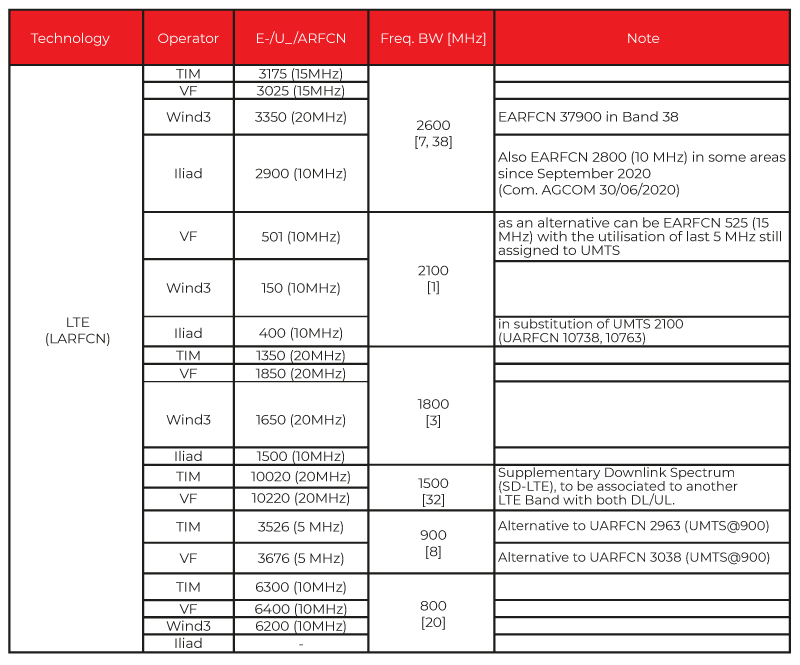 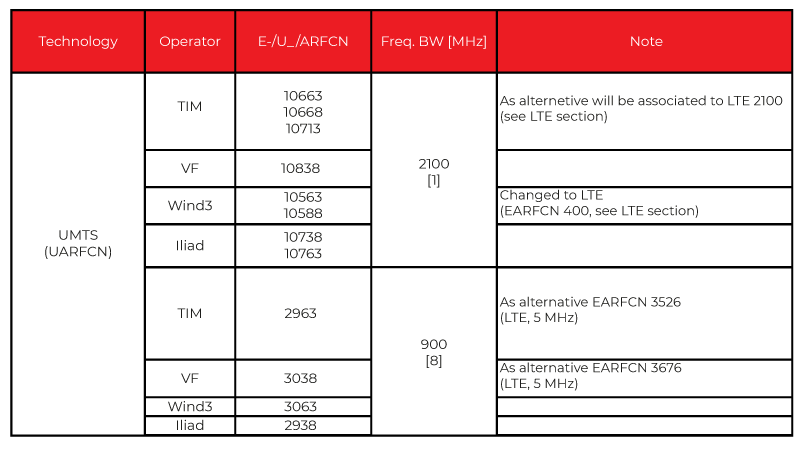 Differences between the operating frequency bands

It is well-known from the intensive studies carried out on the Propagation models, that the lower the frequency, the greater the offered coverage; this is mainly due to the fact that, as the frequency rises, the signal becomes more sensible to obstacles effects.  Another important parameter is the environment; even at the same frequency band, in a rural environment propagation is much more facilitated than in dense urban areas, characterised from a heavy presence of obstacles generating a huge number of diffractions and reflections.

In theory two different bands offer the same theoretical maximum speed with the same channel bandwidth. E.g., a hypothetical B20 (800 MHz) with 20 MHz band could offer the same performance as a 20 MHz band at B3 (1800 MHz), but for example the service area @1800 MHz will be reduced having the same output power levels, due to the above explained propagation related peculiarities.

The available Maximum Bit Rate can be measured by multiple Speed Test available and it is related to the Radio Mobile Services Technology used:

Band 20 is the lowest band currently available for the LTE system, on which the operators are now focused on, additionally to 5G New Radio; this band is suitable for providing coverage inside buildings and large outdoor areas, such as rural areas. Being a frequency previously reserved for TV services, the available amplitude is reduced (30 MHz total, 10 per operator). Its maximum speed is 100 Mbps.

Furthermore, due to the presence of TV services in adjacent Bands, the operator with the lower part of the spectrum (WindTre) has more tight requirements on spectral shaping, to avoid generating and getting interferences from the television services.

Being an higher frequency than the B20, but lower than the B7, it is placed between these two bands in terms of coverage, and it is able to provide high speeds thanks to the high bandwidth available ( up to 20 MHz). TIM and Vodafone operators have this 1800 MHz bandwidth practically everywhere (excluding rare areas where GSM 1800 is still heavily used), while on the WindTre network the B3 has been initially activated with 15 MHz bandwidth, later extended, reducing or eliminating the GSM 1800, to all available 20 MHz. Band 3 is also used on microcells and small cells, replacing or combined with Band 7. With 20 MHz of amplitude, it is able providing speeds up to 200 Mbps, reduced to 150 Mbps in the 15 MHz zones.

This Band was originally dedicated to the UMTS system, but since about two years it has also been used for LTE technology. The conversion started with the 5 MHz channel operated for activating 4G on the 2100 MHz by Vodafone, subsequently extended to 10 MHz. TIM has not yet carried out massive activations of LTE 2100, while on the WindTre network this band is present, it has been activated a few months after the consolidation of the network. The coverage is similar to that of Band 3 (@1800 MHz), while the theoretical maximum speed is equal to that of Band 20 (@800 MHz, 100 Mbps), since their bandwidth is the same (10 MHz).

TIM and Vodafone have 20 MHz @1500 MHz (Band 32), intended for the downlink only (SD-LTE). This band allows to increase the overall download speed theoretically by 200 Mbps. Since it does not have an uplink, it is never used alone, but it is always aggregated with other bands (e.g., Band 3 @1800 MHz, with similar propagation conditions). This band was necessary for TIM activating 4.5G; for Vodafone alternative combinations with Band 1 @2100 MHz can also be used.

2600 MHz is the highest frequency currently available and solely used for the LTE system. TIM and Vodafone have 15 MHz of amplitude in this band, while WindTre has 20 MHz bandwidth. Having less coverage than the other bands, it is generally used for high traffic areas (large cities or crowded areas for many reasons: tourists, exhibitions visitors etc) and on microcellular systems. As for speed, it can deliver up to 150 Mbps for 15 MHz of bandwidth and 200 Mbps for 20 MHz.

The high capacities and speeds for LTE can be achieved thanks to the following implementations:
Higher levels of MCS (Modulation Coding Scheme): they guarantee a higher maximum download speed while keeping the required quality of the received signal.

MIMO: (Multiple-Input and Multiple-Output) allows to increase both the simultaneous user capacity supported by a cell (more users) and the maximum speeds reached by clients that support this technology (higher speeds for the same number of simultaneous users)

Why Your Web Application Firewall (WAF) Will Not Help Against Third-Party Website Attacks?